Are you searching for that elusive gift for the nephew, niece, grandchild, who seems to have everything that opens and shuts, and spends countless hours gaming – whatever that is?

Maybe something for the Xbox? The what? And why X? Do you want a bit of knowledge about it – just enough to show that young person that you are way up on this stuff?

Back in the dark ages of computer history in 1995, Microsoft developed a series of applications to build into their operating system to ramp up graphic performance for gaming software. They were all called Direct-something – Direct3D, Direct Draw, DirectMusic – you get the idea, and there were lots of them. In the end, the team at Microsoft just started referring to the whole lot of them as DirectX. When they eventually released a dedicated game console they didn’t have far to go for a name – Xbox – obvious, huh?

That original version has morphed through several incarnations to the latest series – the X-Series, and the S-Series, both released together. In this day and age of social media and instant reaction, the computer and gaming enthusiasts of the world were extremely quick off the mark with their cutting, some might say accurate, comments on the X-Series box. They all reckoned it looked like … a fridge! And, it does. 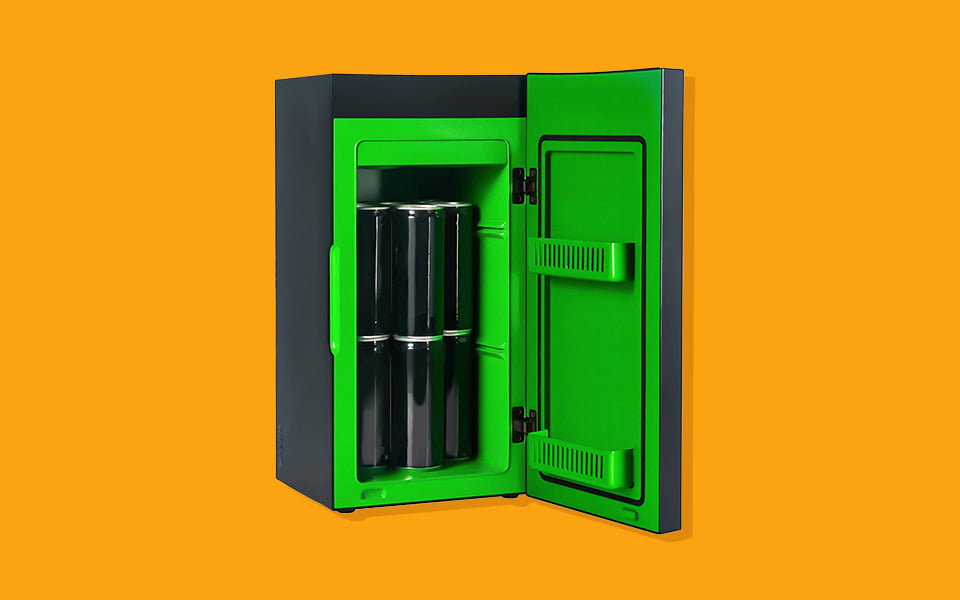 Microsoft have been around the block a few times, and they decided to turn things around a little. Okay, they thought, so if our smart new high-end game console looks like a fridge .. let’s actually build a fridge that looks exactly like the X-Series console. Really, you’ve gotta’ love Microsoft.

This gives it an internal capacity of 10 litres and has 2 removable interior shelves, plus door shelves. That setup enables 12 regular sized soda cans to fit inside, plus a few of your favourite high energy snacks in the door. Now the serious gamer can have a cooling soda, and a top-up of energy while barely taking eyes away from that beautiful hi-res gaming monitor.

The fridge uses thermoelectric cooling, so there are no nasty CFCs, and will cool to 20 degrees C below ambient temperature. It charges either from AC wall power, or a very convenient 12V car socket, enabling this fridge to be used as a portable cooler for travelling.

The top of the unit and the Xbox logo can both be lit for appearance reasons with independent switches.

Serious gamers are fastidious about their gaming setup with everything just so. We would not expect any self-respecting gamer to place a white bar-fridge on the end of their desk, but oh boy, this marvellous and practical little unit will not only be extremely useful, but will be an extremely intriguing talking point for any who venture into the inner sanctum.

Yes it will. No connection is required other than to the power source (wall plug). While it may not visually match the actual game console in use, it will still fit right in.

The fans do make some noise, and we believe an eco-mode is available, however, with either speakers or headphones in use, it may not be a significant issue.