The CookPerfect meat thermometer is an intelligent cooking device that boasts a large range of features, but is it worth the $115 pricetag?

The flagship feature in my opinion is that each temperature probe has six different sensors in it to determine the temperature of the meat. Five of these sensors are in the part of the probe that you actually stick into the meat and the final sensor is on the end of the probe, which is intended to measure the ambient temperature of the air around the meat that you’re cooking. CookPerfect states that this sensor array is then combined with an algorithm, to calculate the exact core temperature of your meat and give you that perfect cook every time. 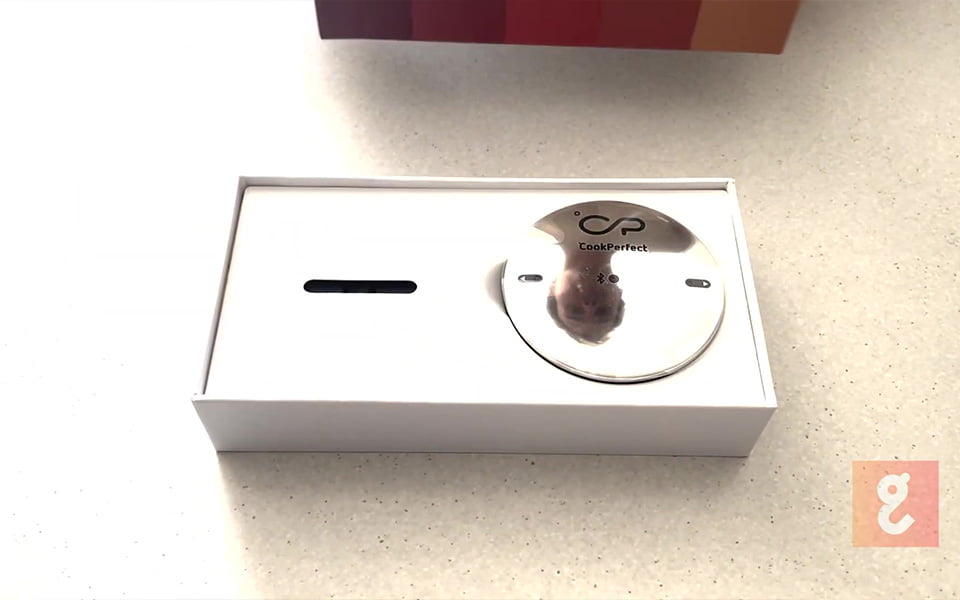 So, immediately when you open the box you have the CookPerfect thermometer. Lifting up the piece of cardboard that holds the thermometer in reveals all the accessories that includes the temperature probe, the instruction booklet, two included AAA batteries and a Phillips head screwdriver to remove the back of the thermometer.

Taking a look around the CookPerfect thermometer you can see it is a quite hefty round disk with three LED lights on the front that indicate if each of your probes are active as well as your power and Bluetooth status. On the left and right sides you have you connections for your two probes, only one of which is included. Finally, on the back you have two Phillips head screws that hold the magnetic plate to the back and underneath is the spot for the two AAA batteries that power the unit.

The included probe has a nice metal braided cable that terminates into an L-shaped probe that has a plastic handle with one sensor on the end followed by the sensor array that is intended to go into your food. There is also a small line on this sensor array depicting how far you should insert the probe into your food.

Setting up the probes is really simple, once you have installed some AAA batteries all you have to do is plug a probe in which turns the unit on automatically. Then you open the app which in my case automatically detected the thermometer and you are ready to go. 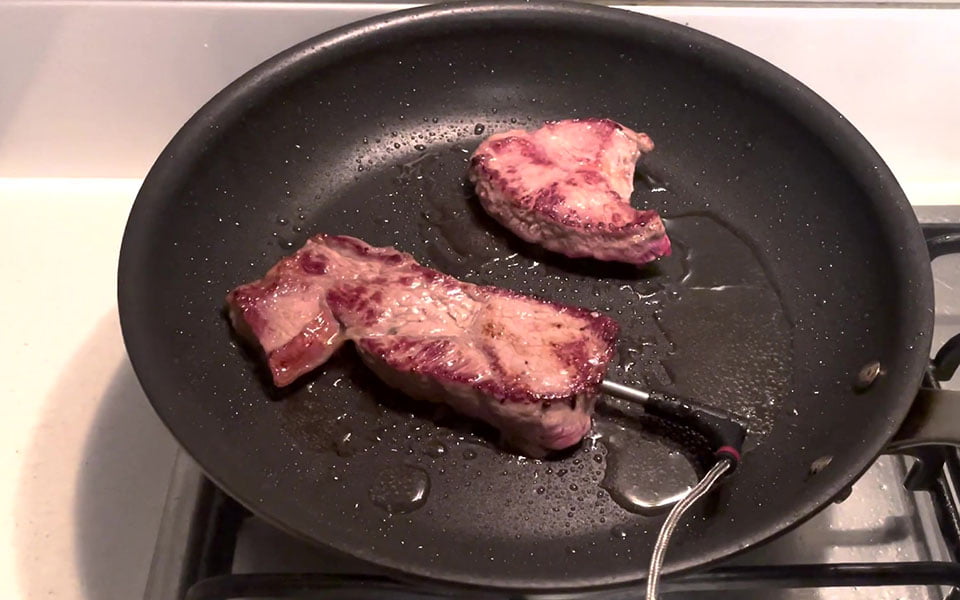 The CookPerfect app seems very well developed compared to other similar apps which in my experience seem to be developed for as cheap as possible and then never touched again. The app allows you to choose from three different categories of food being bakery, meat, and vegetables. From there, you can select how well-cooked you would like your food based on temperature, style or from an image reference. A Gadget User can think of this as expert, intermediate or beginner mode. Once you’re cooking the app will give you an estimated finish time based on the algorithm mentioned earlier in this video. A Gadget User can also set temperature and time-based alerts so that they can check on the progress of the meat or prepare a side dish. Another useful feature of the app is the ability to view a graphical display of the temperature of your meat that is cooking over time.

That’s all good in theory, realistically my experience was not this easy going. Personally, I found that the positioning of the probe in the meat must be 100% perfect for the thermometer to actually work. In one of my experiences using this thermometer I was cooking some pork chops for a ramen that I was making. When I had the thermometer in the meat it registered perfectly on one side of the pork chop, but as soon as I turned the chop over, the probe steadily read a lower and lower temperature for the meat, even though it was still cooking. I cannot be 100% sure why this happened, but when I flipped the pork chop over the probe was further away from the pan. However, this should not have seen a large difference in temperature across the meat, especially seeing as when I took it off it was perfectly cooked, despite registering more than 20 degrees Celsius under what is recommended for pork.

Furthermore, one use case that I use my thermometers for when cooking is checking the temperature of something after I already think it is done, namely fried chicken. This is something that I have not found a way to do with this thermometer and I believe it is due to the multiple sensors up the probe. So, when I wanted to check the temperature of this fried chicken, I stuck the end of the probe in like I do with my other thermometers. The trouble was that it wasn’t reading much above the ambient temperature. I found that I had to stick three pieces of chicken in a line on the probe so that the meat was covering all the sensors to actually get an accurate reading. I would really like to see a feature like this added in the app where you could see the value that all the different temperature sensors are reading or at least just the end one so that you can check the temperature of your food in this manner. To give some credit to the CookPerfect thermometer though, my partner actually found a way around this. What she found is that if you have a smaller piece of meat, like a chicken drumstick, instead of just sticking the probe in the middle of the meat like you normally would, you need to instead position the probe so that it is going through the longest part of the meat as seen here.

Another issue I had with the CookPerfect thermometer is that I could not get the estimated finish time to work with my food. Now this is a very useful feature that CookPerfect boasts about and having it not work is very disappointing. Realistically, this seems like a very simple feature to figure out mathematically you just take plot the temperature and time on a graph and extrapolate that out until the desired temperature is reached and there’s your time.

Now, my experience wasn’t all negative. When the thermometer actually worked, it worked really well. The CookPerfect thermometer gave me really solid readings for both the temperature of the food I was cooking as well as the ambient temperature. The alarms on the app also allowed me to confidently walk away from the food that I was cooking when I was leaving it to cook for extended periods of time. Finally, to its credit the feature that allows you to cook your food by how you want it to look is extremely useful and, even more importantly, really accurate.

Comparison to my current thermometer

Compared to the thermometer I currently use, which is a Maverick iChef, the CookPerfect thermometer has a much better build quality, and the magnetised back is extremely handy. However, at least in its current state it doesn’t have any more features than my current thermometer and potentially has less features depending on how you use your thermometer. As I mentioned previously, with my current thermometer, I like to test some of my food after I believe it is already cooked and with the CookPerfect thermometer I cannot do that. Alongside this, my current thermometer doesn’t need an app to work due to its onboard display but uses and app more like a companion if you would like more features like alarms and warnings. Otherwise, in its current form it seems to have most of the same features with the added benefit of the visualisations so that I don’t have to remember what temperature medium-rare beef needs to be cooked to.

So, how does the CookPerfect thermometer compare to others on the market. Well, as I stated previously in this video it is prices comfortably in the middle whilst claiming to have a lot of the features more expensive thermometers have. Unfortunately, at least in my testing, I couldn’t get a lot of those features to work. If those features did work, then I would be 100% satisfied with giving it a 5-star rating and recommending it to any Gadget User who likes to cook. However, all the features don’t work and for the price I think without those features it is a much harder sell and only warrants a 3-star rating.

So, I would recommend the CookPerfect thermometer to a Gadget User that likes the style of this particular thermometer who is comfortable with having a simple thermometer and willing to gamble having the features outlined previously in this video.

Joshua is our head of video production. He draws his experience from over 10 years of experience in the field working for various productions as well as his university education. in addition to his two degrees, Joshua has had many prominent roles as a presenter and actor in short films, music videos and advertisements. As Gadget Users head of video production, he is responsible for writing, producing and overseeing the video content that Gadget User produces.